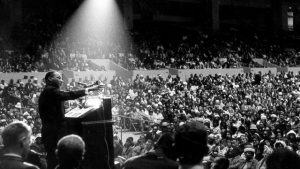 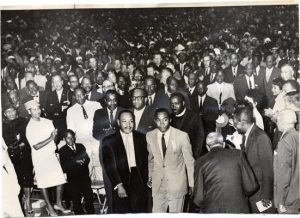 As a lawyer and communications professional words are one the tools we use to persuade, convince and resolve. We rely on court opinions and written statutory law enacted by legislative process. We rely on words from prior court cases and prior generations that might use words we find offensive or off-putting now. We reference our time and shape our vision of the world with words and phrases. We learn from the words of the past about how things were then and how they are different now. In my tradition, some of those words were written thousands of years ago.

I have hesitated to publish or submit to the MLK archives the speech my father gave after he returned from the Selma march in 1964 because his words, like those of Dr. King at the time, are different than words we use now. He was asked to give a speech to the wider community about his experiences. But I have concluded that his speech belongs in the MLK archives so that his perspective is preserved for future generations. Without context, we cannot fully understand the effort and its progression, even if the words used then are dissonant now.

I thought this week about what Dr. King must have thought as my parents brought me and older brother into that small room in San Francisco to meet Dr. King and Ralph Abernathy. I can imagine the respect he had for my father to bring his children along in this historic fight, and take us to the Cow Palace (photo attached) later that night to sit with thousands of civil rights activists and supporters as the battle lines for equality were being drawn. As I sat in the audience with my family while my dad was on the podium with Dr. King, I didn’t notice at all that we were a super minority that night.

Many friends and kindreds have asked me to write about my experiences as a young kid growing up in a family in which civil rights was the family business. You know some of their names. From the former attorney general, on-air broadcasters, actors, lawyers, to professors, appliance repair persons, and strangers. They are stunned to learn more about the challenges faced then. I tell them although the “Selma” film seemed to portray one rabbi at the march, in fact there were 28 American rabbis, including my father, and many other interfaith clergy who walked the walk in Selma to support black voter registration. Losing this history is only one of the reasons the chasm fueled between minorities in this country, is wrong and frightening. It is intended to keep us from gaining strength in numbers.

Dr. King knew that coalition was critical for the effort. If we lose this and the chasm grows and history is forgotten, we will never reach the dream. If we focus on the words, and not the acts of support and courage, we lose some of the strength we need to keep fighting for equality. The anniversary of my mother’s passing this week meant that her name was read in our synagogue. As it was quickly read in a list of many from the pulpit my father helped to create, I thought about the fact that few realize the greatness of this woman, My mother supported everything dad did, including the dangerous actions he took against hate. He used that pulpit to inform and push others to do what he thought was right. To take action. She herself worked directly for housing equality. And dad pushed for things like education equality in ways I didn’t know until recently. As Congresswoman Jackie Speier said to a friend about my father “he always did the courageous thing.”

Most people don’t remember the struggle involved in moving the nation to honor Dr. King’s memory and his actions and courage over many years. Smokey sang about it. We urged that Dr. King, our Ghandi, deserved recognition. As a phenomenal orator but perhaps just as importantly,  a gatherer of humans who embraced interfaith communities and all people willing to join in to win equality. Why should presidents have a national holiday and not the most influential civil rights leader of our time? I thought about that year my employer failed to close for MLK’s birthday, so I didn’t go to work. I made my point by action, not words. A young woman posted earlier this week that corporations honoring Dr. King’s birthday are just using the holiday to promote their “fake” interest in equality. But if you are from my generation, you are missing the history you didn’t live through. This important recognition is and was a major step forward.

Without identifying difference and the necessity of equality for every person in this country, we knew we would never be rid of this disastrous legacy of hate. The most horrific example being the founding of our country with lip service “all men are created equal.” Slavery continuing while the words equality was applied to men, white men, the Jim Crow of our founding. As these words were written, the hypocrisy was alive and active. Slavery had already been abolished in England. But our founders, like others today, compromised the very values they espoused by failing in the opportunity to correct this appalling disregard for human rights. The worst hate crimes imaginable. Honoring Dr. King’s birthday demonstrates our respect for him and for the unfinished work.

As a woman lawyer having experienced discrimination in my profession, having biracial children subjected to hate crimes along with me and their dad a Mexican American judge, I know what hate feels like. I know what it feels like to be pointed out as different. Pointing out difference presents a quandary. If decades ago, we ignored differences, we would not have made any improvement in the equality battle. Dr. King pointed out difference. We speak out about difference so that we can ultimately eliminate seeing it.

In my profession we created diversity officers for more inclusion of every difference, but we could not do that ignoring difference. Women have been historically left behind as leaders of law firms and corporate law departments. In the late 1970’s when I clerked at the California Supreme Court, we were led by a female chief justice. The first woman chief justice of Pennsylvania was just inducted this past week. Over 40 years later, a woman had finally achieved the requisite seniority to gain this position. Although happy and proud about this step, her gender was pointed out repeatedly during her induction. Perhaps one day it won’t be noticed. But not yet, because women and others are still underrepresented in my profession in many ways.

All minorities are underrepresented in our country and unfortunately there is an effort to turn back the clock on the important work done in the civil rights movement. We can only correct this by chipping away person by person, to true equality for all difference … no matter what difference. We cannot achieve that by not seeing difference. Inclusion cannot happen in a world in which we don’t embrace difference. We need one another, but it seems we are pulled farther and father apart. We shut down dialogue and we fear difference. Some promote and seek to divide with hate. Whether we can change the hearts and minds of those who seek division, is uncertain. But for those willing to see the possibility that greater equality is possible, we must unite and try to bring others with us.

Until we fully embrace the beauty and value of diversity, we will wholly fail to truly create equality for all humans or live up to the dream of that great man I met as a child, Dr. Martin Luther King.